Women Who Inspire Me: Marie Rarieya 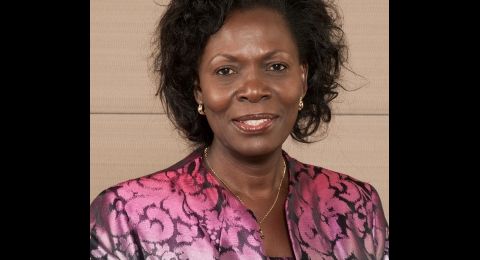 My first recollection of my Aunt Marie was walking in my childhood neighbourhood and she was holding my hand. From time to time smothering me with hugs and kisses. Other than my mother and siblings I had never received so much unconditional affection. She would tell me stories and she would sing to me. That was the first time I had ever heard a Luo lullaby, Nyandolo nindo tere. She sang it to me every night I went to bed.

As I grew older I was fascinated by Aunt Marie, unlike other Aunties, she was her own woman. She was the original “ Boss Bitch!” if I may say to me. She took on uncles tow to tow. I would watch her as she conversed with uncles who were senior civil servants, lawyers, engineers. She would engage in such intellectual conversations. She stood her ground, she would speak her mind. The only other woman I had seen do that was my mother.

When I was a teen, I recall she worked at ICRAF. I was so fascinated that she worked in a multi-national organisation. It is through this I was introduced to a new world of work. The world I knew was one of civil service that my parents worked in. I found out as a young teen that there were other options outside the civil service for work.

When I heard she had left I was devastated. I wondered why, as we always say in Kenya “she would leave such a great paying place.” At the time she was leaving she owned a home in a Nairobi suburb, she was driving her car. She always stepped out at events dressed to the nines and always smelt good. And to boot, there was no man to define her. I loved it.

I later discovered she left the country for further studies. She studied to her PhD working in Asia, US and Africa. Whenever young girls were on the verge of giving up on school because of some young man, my Aunt Marie was the one mothers and Aunts gave as a living example. Reminding girls they can be whatever they can be and not be defined by the conventional route of marriage. Aunt Marie changed the game!

My mother always preached the order of life thus; finish your studies, get a career, then have a family. She always told me, “ look at me! That was the path I followed and look at all your aunts.”

True to form, except for an Aunt who was mentally ill. Most of my Aunts on both my dad and Mum’s side followed my mother’s route.

What made Aunt Marie a beacon for me was how far she’s gone with her career and how she took her time to get married. It always felt like, Aunty Marie was always working according to her plan and not one chartered by others.

She like many women of her calibre invested in herself, not just in terms of education but in terms of building her investments. I have to admit it, I think subconsciously I aspire and work towards the same path.

Every time I have conversations with people about education in their families, I never take it for granted. Because like I have said before, I am a fourth-generation educated woman on my mother’s side and second-generation on my Dad’s side. When you live in a world where women are thriving around you in academia, building powerful careers, being phenomenal mothers and wives, it’s easy to take that for granted.

My Aunt Marie has been the epitome of what pacing your life and works according to your time frame is. Because in her generation all those who questioned why she wasn’t married in her 20s like everyone else, thinking there was something ‘ wrong with her, now think differently. Aunt Marie defied the conventions of her society and God knows it was difficult. But now, she is a role model for young girls not just in my extended family, but our village and clan. She embodies for children what a successful woman can be when she follows her path. I thank God for Aunt Marie!