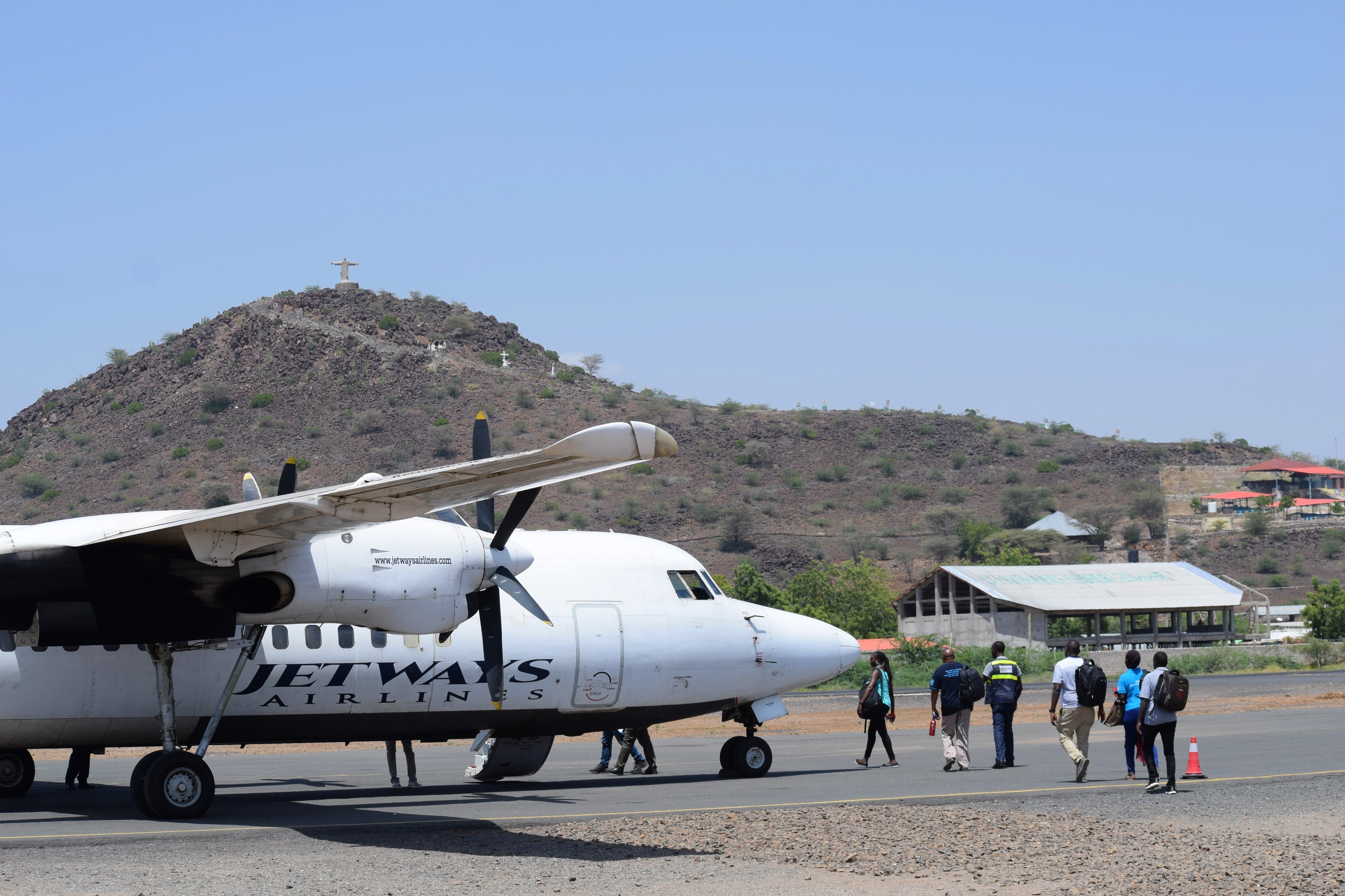 When I heard I would need to go to Turkana for work, I was elated. I had never been there and had always wished to go. It’s weird to say this, it’s part of Kenya, but for years has been extremely remote and the road trip stories I have heard and been told of first hand required 4 x 4 cars, was overwhelmed with banditry and the need to pay local administration police for escort. It sounded overly expensive and alarming in many ways. I wondered how people in Turkana managed.

I discovered there were flights, not just the usual humanitarian flights to ferry staff to and from Nairobi; commercial flights are a dime a dozen at least 2 to 3 times a day.

Last Wednesday I had to get up at 4 am and get ready to leave my house by 5 am. Needless to say, I was grumpy. Who in the world thinks that waking up at 4 am daily is a good idea? Not me! My cab arrived and I was off to Wilson airport at 5 am.

We pulled in to the first security check, a police officer with a rifle draped across his chest in his blue trench coat and navy beret leaned in to talk to the driver,

“Muna mizigo?” Of course, we have luggage I thought to myself. I was waiting to be told to get out of the car and have him check my luggage, but alas.

The driver responded as I also echoed, “Ndiyo!” I had check-in luggage. I unbuckled my seat belt ready to be asked to hop out for a security check and the cop just said,

What? How is it OK? This is an airport, a high traffic airport and this man just let us through. I am not sure if he was sleepy and misunderstood us or he just didn’t care. I know how invasive and annoying security checks are. But I also understand their importance. So off we went. And it worried me just how many people were flagged in without a check.

The cab guy dropped me off at Skyward Express. It is a matchbox of a place. A seating capacity of maybe 15 people the rest would need to stand. When I arrived about two chaps were standing by the counter with a weight machine and luggage stickers. and next to them were three others behind the counter.

I placed my check-in luggage on the scale and the man with the stickers asked me to wait a few minutes. The only lady behind the counter was typing away speedily. She looked up, smiled and asked me for my national ID and my flight details. I passed them to her. One of the two men by the scale pulled out a clipboard with a printout of all the passengers manifest and checked against my name and his colleague placed a sticker on my bag.

“We will inform you when you can board the shuttle which will take you to the plane.” The lady said as she pointed me to the now empty chairs in front of her. People had stood to check-in.

About 30 minutes later, we were on the shuttle to the departure terminal. It was a tiny door. You can tell Wilson wasn’t built for this much traffic and some reason, I have no idea why the government hasn’t expanded it yet. I saw check-in luggage spread on the ground with an adorable sniffer dog being guided by a police officer. I felt sorry for that animal. Its senses must have been overwhelmed with all those bags.

There was a tall gentleman by the door who verified tickets against IDs taking the time to look us sternly in the face. The waiting lounge was so full. The sound of people and telly was one loud buzzing sound, my mind soon tuned out. There was a Wajir flight, UN flight and our Eldoret – Lodwar flight. My colleagues seemed used to plastering themselves against the walls as porters shuttled luggage through the corridors with people littered like swarms of locusts.

“Just wait, once the Wajir flight boards this place will clear out.” One of my colleagues assured me.

And true to form, it did clear out. There were so many places to sit.

We eventually boarded the plane at 7.20 am. I was relieved at first, I didn’t want to be caught with the funeral procession of the late despot at the airport. The first thing I noticed when I walked into the plane was how old it was. Some seat sections were sliding off the seat, like a bad couch cushion sliding off a couch. Some seats were unusually depressed like a giant sat in it and its huge rear left a concave dent. The lights at the top looked glued on. I prayed for journey mercies once again as I settled into my seat.

There was about a 30-minute delay at Wilson, we were caught up in the procession briefly. We were cleared to fly and off we went. What we didn’t know when we arrived at Eldoret Airport to drop off transit passengers was how long we would be there.

The flight attendant who had ushered us in politely asked us to,

“Please disembark from a plane, we are experiencing a technical hitch, we will be on our way shortly. We apologise for any inconvenience caused.”

No big deal, I was hungry anyway. It was about 9 am, it was time for tea, the plane offered soda, water (questionable brand)  and biscuits. There was nothing for me in there. Soda gives you so much gas, why take that at all mid-air, where you get even gassy?

I grabbed some deliciously fresh mandazis and a mochaccino at the airport. 30 minutes later we were called back on the flight. A few minutes later, just as we were buckling in, the flight attendant made the same request quickly exiting the plane with a distraught look on her face.

I laughed because it looked comedic. I was unusually calm. Normally at this point of delay, I would be snarling and chewing out the flight attendant.

This later turned into a 2 and a half hour wait. Something was wrong with the plane engine, we had to wait for a spare part. As a treat we were given a 300 shilling voucher to order anything we like, that meant a cup of tea and two mandazis. If you wanted a samosa that would be 50 shillings extra. If you wanted a garlic dawa (hot lemon, ginger and honey drink) that consumed the 300 shillings in its entirety.

Just as I stirred the honey into my garlicky dawa, at the 2-hour twenty mark of my wait, we were called to board. I quickly had it served in a takeaway cup, used the bathroom and off we went. 50 minutes later, we arrived in Lodwar town. Exhausted, irritable and now burning from the heat. But I was relieved to have arrived safely.

And to my surprise, I discovered there was a statue of Jesus the redeemer atop a hill overlooking the Lodwar airstrip.