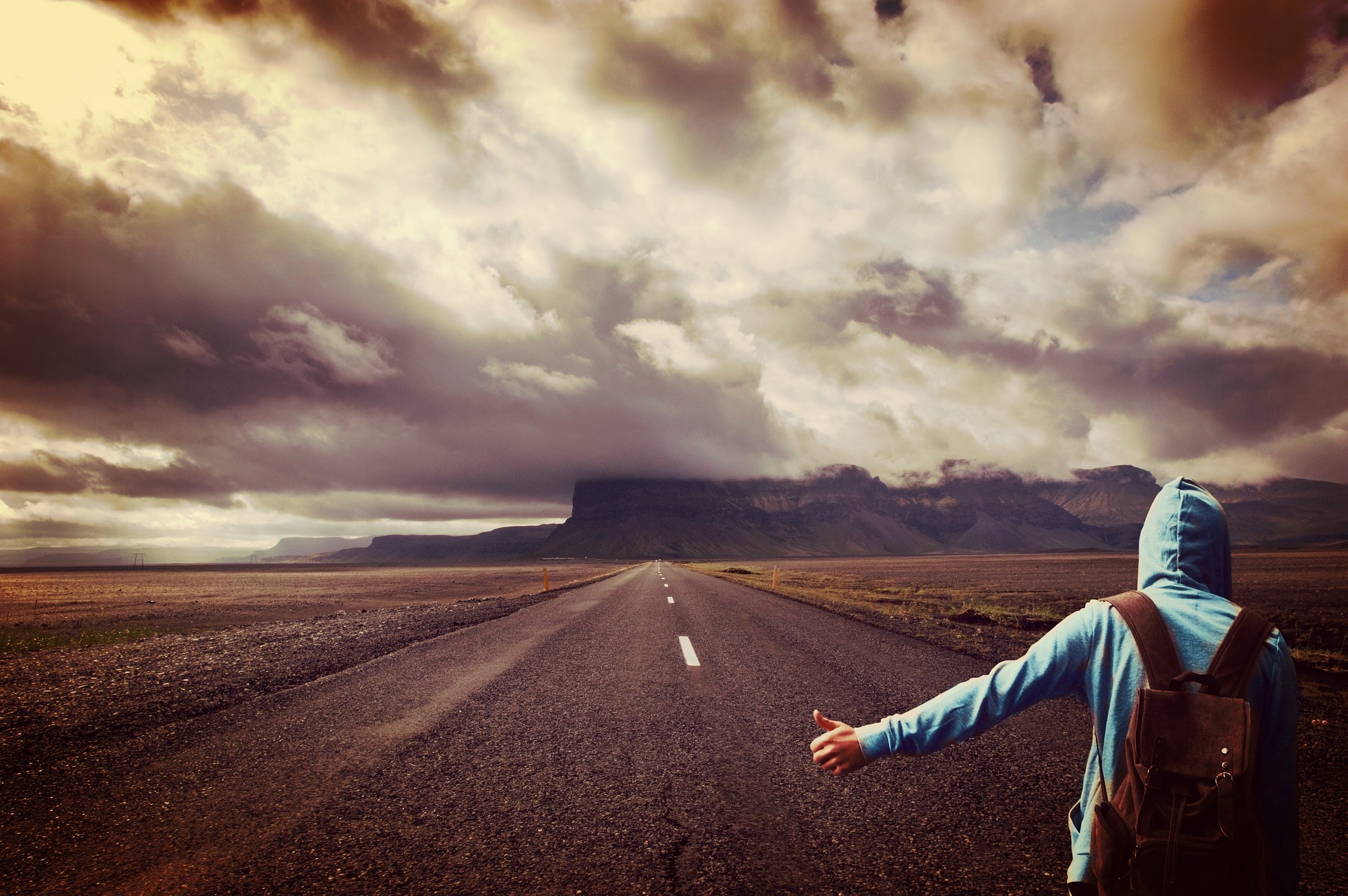 “Did you carry the torches I left on your bed this morning when I was heading to the shower?” Louise barked at Lorraine.

“Yes,” Lorraine responded rolling her eyes. “Anything else mother?” she uttered sarcastically.

“Take that tone with me now, you will be thanking me later when you need me in the wilderness.” Louise snorted.

“Can we not do this now, I am cold and hungry and your darn hitchhiking idea to save us money on the trip is already costing us. Can we just GO TO TOWN AND GET A JAV?” Lorraine had had it. They had been on the Highway for over three hours with huge backpacks on their backs. Lorraine dumped hers on the ground and sat on it.

“GET UP! LORRAINE!” Louise’s bossiness was exhausting and only added to Lorraine’s irritability.

A marked van slowed down. The yellow line on the side with the Nanyuki/Isiolo written on its side indicated it was a matatu.

The side door opened revealing comfortable chairs; Lorraine grabbed her bags and walked to the door eyes locked on a vacant seat. She didn’t hear the fare price. Louise bolted behind Lorraine when she heard the fare was half price at 500 shillings.

“Asante!” Lousie smiled as another passenger pulled the door shut. Soon they were off and the happy chatter and laughter resumed in the vehicle. They soon came to discover it was a bunch of friends who were heading to Nanyuki town with an initial detour to the Aberdare Ranges. They had planned a game drive and some hiking.

“Sounds like a plan, we should join them,” Louise attempted to convince Lorraine whose eyes were fixated on the changing flora outside as they drove.

When they got to Karatina town the van pulled into a petrol station, the group needed a break they had been driving for about 4 hours and needed a stretch. Lorraine hopped out to stretch glad she was free of the burden of her bag on her back. Louise stayed in the van eavesdropping on the conversations.

She heard the sound of metal falling to the ground and a squabble ensued, she turned to see what was going on, one of the men concealed something in his jacket. She couldn’t tell what it was. She quickly hopped out of the van, her bowels beckoned relief. On her way back she grabbed some fries and a soda to munch on for the next leg of the journey.

On her return the mood had changed, there was urgency; even the driver seemed more in a hurry. It wasn’t quite clear what has caused the change of mood. Louise was reading her book listening to her mp3 player. Lorraine couldn’t be bothered she was still irritated with Louise and her nagging earlier in the day.

Louise watched as signposts and shacks zoomed past as the driver sped on the Highway, she soon noticed a sign which looked familiar and wondered why they drove past it. It was only 20 minutes later, she realized and asked out loud.

“Weren’t you all going to the Aberdares? We just passed the entrance back there?”

There was some shuffling in the seats and one person responded, “we’ll visit it on our way back from Nanyuki.”

Lorraine nodded and continued gazing out the window. A few minutes later she felt something pressing against her side, she shoved it with her hand without looking. Then when she felt it press against again, she looked, froze and slapped Louise causing one earplug to fall out.

“WHAT THE HELL…” before she could finish Louise felt something press against her as well, she looked down and she fell silent and felt wet all of a sudden. She looked and realized she had peed on herself.

“Alright ladies, this is the plan. When we get to Nanyuki town, stay in the vehicle. As soon as we get back, we will release you and we will go our way and you go your way. Is this clear?”

As the vehicle pulled into a lot of lands barricaded with corrugated iron sheets, the car engine still running, the men hopped out.

Lorraine nudged Louise to hop out after the men left the compound. Louise just shook her head.

“Let’s go! They could come back and kill us.” Lorraine demanded.

They heard cracks of gunfire, Louise started to cry. Lorraine slapped her.

“Get a hold of yourself, you need to focus on how to get out of here and stay alive. Yank the door open and slide it slowly.” Lorraine instructed.

“Look! They are thieves, they are here to rob someone, we need to live. So we leave! Open the damn door!”

Lorraine reached over Louise and yanked the door, climbed over her and yanked her off her seat. The seat was really wet.

“Damn girl!” Lorraine remarked as she yanked their bags out inhaling the stench of urine.

“Listen, we have our phones, we can get help. Right now we hide. She yanked Louise’s hand towards a shipping container and they jogged to hide behind it.

About 3 minutes later with incessant gunfire, the men ran into the vehicle and rolled out. No one asked where the girls were; they drove off kicking up dust, with cops hot on their tails. The girls sat for about 30 minutes paralysed by the event. Lorraine called for help as they walked to the quiet road ridden with bullet casings wondering how they got into this mess and how they may have just survived unscathed.