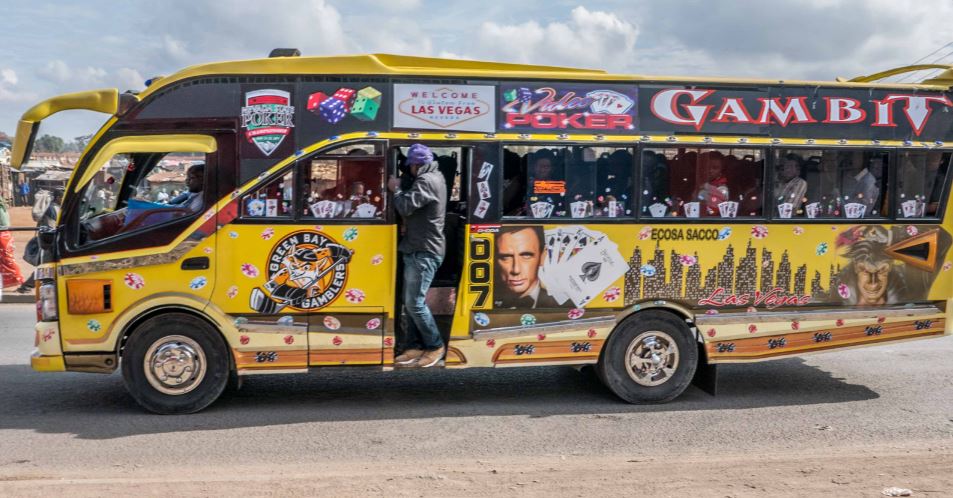 The matatus blared at the bus stop, the sound of their awkward horns and the shouting of the touts calling out to customers and chattering of passers-by made an unusual symphony on Tom Mboya Street. The swarms of pedestrians flowed into the street from adjacent buildings and streets flowing in between traffic, boda-boda motorcycle taxis swerving recklessly past vehicles and pedestrians.

“Jinga wewe!” one man calls out concluding his statement with a click, after being nicked on the side by the boda-boda.

The police officer, fanning his hands aggressively to get the traffic flowing. He points his baton at the windshield of a matatu dwarfing his slight frame. The driver nods his head understanding the threat before him.

“Beba! Beba! Beba!” Kama, one of the numerous matatu touts call out. He bangs the side of the noisy matatu with his fist.

I got five on it!  Got your 40 let’s get keyed. I got five on it…” The Luniz 90’s hit single blares out of the lurid orange vehicle, plastered with images of American rapper Snoop dog blowing out smoke from what looks like weed; Kama persistently calls out to potential passengers.

“MSUPA! 50 GARI! GARI YA 50 MWISHO!” He says enthusiastically fanning a white placard with the number 9 emblazoned on it. He cranes his head at passing ladies, convinced that endearments and the cheap fare will lure them into the vehicles. He’s unsuccessful.

A white minibus pulls up next to the vehicle Kama is trying to fill; no music, no fancy graffiti, just a simple white minibus. The crowds at the bus stop all throng to the door of the vehicle. The tout inside the bus shoves people back demanding they allow the passengers inside to alight.

The crowds jostle and wrestle and finally shove themselves in, men extending their arms above the others reaching for the handlebars shoving themselves in, as others push beneath raised arms trying to fit through every nook and cranny. Women in heels and in impeccable suits jostle and claw. One woman’s wig falls to the ground sending bystanders into a loud chuckle.

The woman reaches out to what looks like a lifeless vermin on the ground as she slaps at legs screaming, “Wig yangu! Wig yangu!”

“GARI IKO CHROME!” the tout of the white minibus calls out smacking the side of the vehicle; crowds now thinning out from its door. As the jostle dies down the lady finally gets a hold of her wig and lifts the dust filled object, dusts it and then tosses it into one of the bags she has.

The crowd roars in disbelief as she does so.

“OOowwwi!” another man calls out pointing and laughing.

Kama’s matatu is finally filling. He raises three fingers gesturing the number of seats still available as he verbalizes his gesture, “Watatu tu!” He gets a lot more aggressive and begins to reach out for people’s arms trying to physically persuade them into his vehicle, he is shoved aside by the individuals.

A loud reverberating sound is heard and Kama is holding his cheek. He grabbed one woman on her shoulder and accidentally peeled off part of her shirt revealing her bra. She wasn’t taking the physical assault and slapped Kama right across his face.

The crowds roared into laughter again.

“ILI IWE FUNZO!” a fellow tout directed his comment to Kama. Kama raised his middle finger at him as he mustered the courage to defend his bruised ego, “MALAYA WEWE!” He yelled in the direction of the woman who was now far from earshot.

The driver of Kama’s matatu hooted and slapped the roof of the matatu. Kama knew the drill; the vehicle was full and it was time to get going. He guided the matatu out of the parking spot and let it steadily build up speed; he chased it, running with shoulders high above his neck as he grabbed hold of the handlebars on the door and swung in through the door.

Kama hissed and leaned on the open door as the matatu navigated it’s way past the rush hour mayhem. Just as they hit the highway which was relatively clear, instead of collecting fare from the passengers, Kama grabbed the handlebars framing the door on the outside and began to swing himself like an acrobat. After about 5 minutes and several near missed of his legs begin snapped by speeding vehicles, Kama heard a screeching sound while he was in mid-air and the bars broke off, he screamed as he fell and speeding oncoming vehicles ran over his body causing a pile-up on the highway.