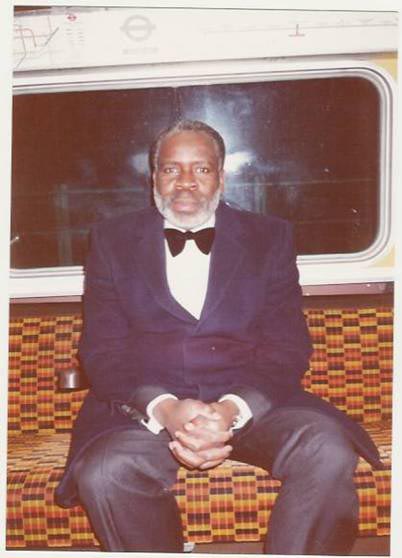 Last Friday was my Dad’s birthday; he would have been 77 this year. It’s been 16 years since he passed away. I miss him more every day. I have endless questions I want to ask him about his childhood, about my granddad who I never met, what it was like coming of age so far away from home, his side of the story on how he met mum.

Unfortunately, all I can do is imagine the answers. Despite his physical absence, he is still in my heart and I will always love him. He taught me a lot of pertinent lessons, the most powerful of them all were more through his deeds than his words. Here are some of the lessons he taught me through his actions.

The first lesson in self-respect was grooming. My parents were super particular about how you looked before you left the house. Every morning we would leave the house, there was a check, was your hair tidy, was your uniform ironed, did you polish your shoes, where your socks clean, did you brush your teeth in the morning. In most cases, we were all in the clear, but there was always one minor detail I always left out – my eyebrows. My dad would look at me, and right at the door before he closed the front door, he would press down his thumbs (in what he thought was a gentle fashion- I had to ask Mum to ask him to do it gently, I was never sure how to break it to him) to align my eyebrows. When he was done, he would say, “now you are ready” and I would head to the car.

Dad was an impeccable dresser, he smelled good and his breath was always fresh. Dad showed me that a great way to respect yourself is how you dress.

My dad would walk into a room and attract attention, he didn’t have to say anything or do anything. His mere existence drew attention. It was probably till I was about 9 or 10 years old that I noticed this. My mum was more educated than my dad, but the way my dad would proudly say that he had a High school education always surprised me. Yes, he did get on the job training like most people just after independence did at work. But he never did go to college like Mum did. It amazed me at how he believed in himself and his abilities so much so, it literally oozed out of him.

My dad never did things half-hearted, he gave whatever he did 100 percent and he never allowed us to give in easily. My dad worked really hard, there were evenings he would get home super late, his work involved a lot of travel, I never once heard him complain. But what amazed me was despite his exhaustion in the evenings, when he could, he would teach me stuff like polish my shoes, he would check my homework and yes, there were times my dad cooked.

Dinner time was super family bonding time; we would talk about each other’s days. My parents would share funny stories about their childhood as well. But if someone had a problem, my parents would stick on it till the matter was resolved. If the aggressor was at the table, the matter was confronted and as siblings, it would be resolved. No one went to bed angry. It was during these moments, I realise now in retrospect, my dad didn’t care for mumbling and muttering. My dad expected you to speak clearly. If you weren’t clear he would say in such an irritated voice in Dholuo, “ewacho ang’o?” What are you saying? Just a look from him was enough to get you speaking properly.

My parents, like most African parents, were not very PDA. My dad wouldn’t actually say I love you, but he showed it in his own way. There was a way my dad would walk into a room with you and proudly announce you were his child. It was the attention he gave you when you went shopping or at a family gathering. It would even be being teased at the dinner table or a little prank he plays on you.

I also saw, how much he loved his siblings; he was so dedicated to my Aunts and Uncles and did all he could for them, which spilt over to his brother and sister-in-laws. My mum would tell me that at times my dad would go over to her mum’s place and spend two weeks there. For all the love my father gave, I realized he learned how to love from his father, not his mum. My paternal grandmother was a piece of work. My maternal grandmother, on the other hand, was like an angel sent from heaven to shower love on everyone. My mum would only discover after the fact when her mum called her to give her the heads up. J

My Dad was generous to a fault; his financial personality was Mother Theresa. If there was anyone in need, a friend, a workmate, a sibling, a niece or nephew, he would help. No questions asked. The sad thing was people took advantage of that.

Like what I see in my sister, Dad saw the good in people. He was slow to judge and quick to trust. My mum is equally like my dad in this sense. They really don’t judge people based on what they look like or where they came from. If my mum thought you were a shifty character or you were disrespectful you would be out the door.

I recall, especially during the holidays when we would travel to the village, my parents would entertain for pretty much the whole day, every day. People of all walks of life would walk in through the door, from neighbours to the village madmen, it was as a child that I realized that mental illness was a huge problem, but equally normal. It wasn’t odd having someone who was mentally unstable stay over for lunch and shares very bizarre stories. There was one lady who would enter the gate start praying and then shift to a conversation in mid-prayer. It would take a few seconds to realise what had happened. She would be seated right next to you having a conversation and ask you why your eyes were closed while she was speaking to you.

No matter the day, no matter the function, my dad would always be in charge. At times my dad would be attending an event as a guest but would be called up to lead something or the other. Growing up during the error of endless fundraisers, what we call Harambees; where the communities would come together to either fundraise for someone’s education, weddings, funerals or medical treatment, it was normal to see my dad nominated chairperson or ‘guest of honour’.

He was also the man who always rallied his friends when something was needed in the community, building a church or solving family disputes. Whenever people had any kind of problem, my Dad was the one people ran to, and it was people of all ages, some even his father’s age. Dad seemed to have the gift of problem-solving and offering guidance and direction.

This I noticed from my cousins. A good fraction of my male cousins would dress up like my dad and some would tell me and my siblings that they actually wanted to be like my dad when they grew up. My dad inspired people to be better; he celebrated and encouraged everyone to be their best. And he did it effortlessly, it was who he was.

It was years after my dad died that I realized why all these men ran to him with their problems. My dad was a man. He took responsibility for his actions and he was responsible enough to respect his wife, provide, protect and care for us as a family, the best way he knew how. When my mum started having run-ins with some of my distant uncles, I realized two things, one my Mum is a woman of steel, she holds her own! Go, MUM! Whoot! Whoot! Secondly, my Dad was one of the very few men, in his extended family, who understood the power of women and actually took care of his home.