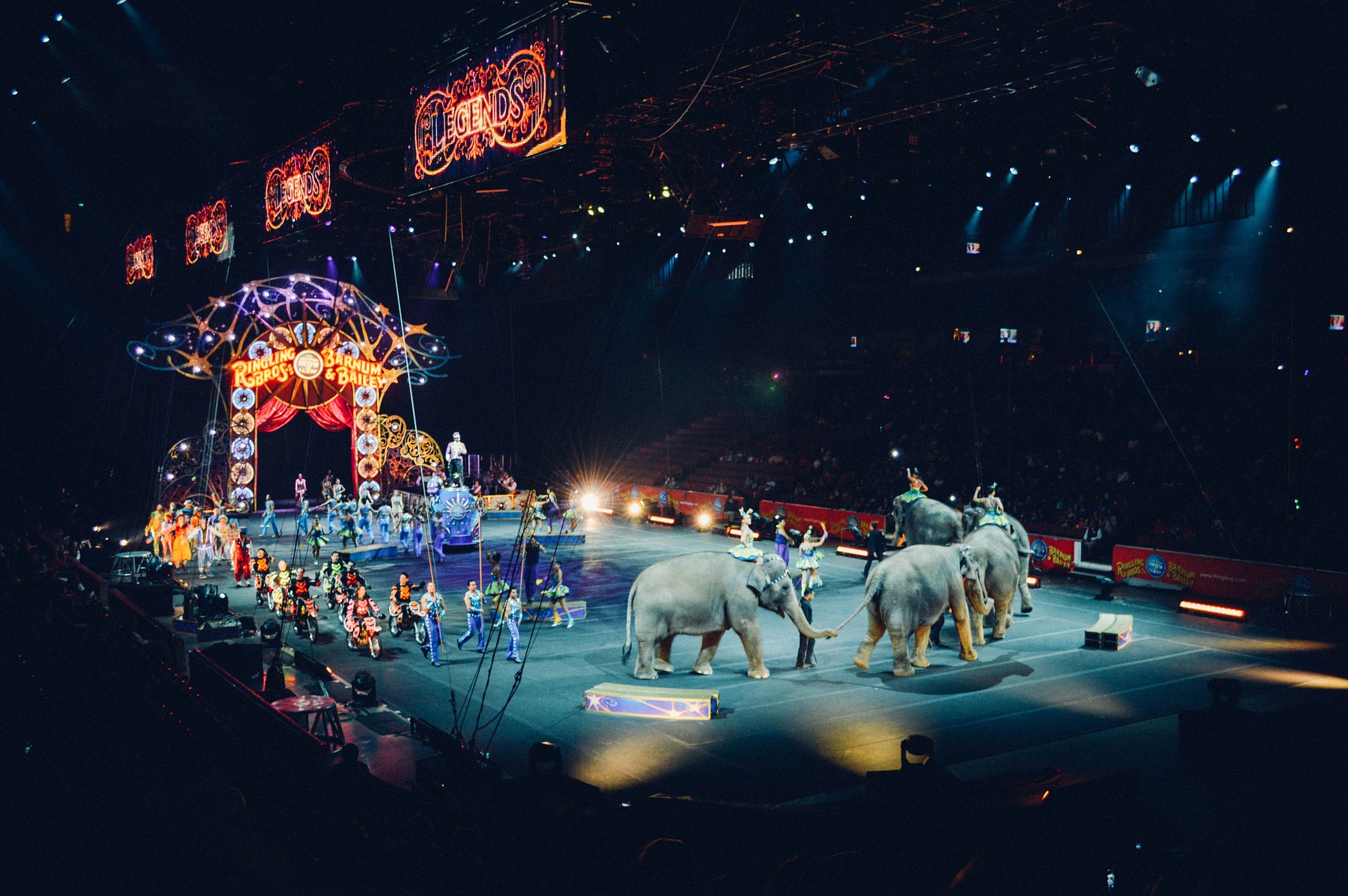 Drum rolls rang in the arena; there was an expectant silence in the darkness only slightly illuminated by the spotlight in the centre of the arena. The juggling monkeys and the vegetarian Hyena had already dazzled the crowd , Ella was up next with the usual colossal act; balancing on a beach ball while rolling across the arena.

“How unoriginal! Is this really all circus folk can come up with?”

“Shhhhhh Ella!” The serpent interjected. “Just do what you are here for; you’ll get the master angry.”

Ella emerged on twos, the crowd gasped. Ella began to dribble the beach ball like a professional basketball player. The crowd cheered, it was extraordinary. The Ringmaster cracked his whip, Ella trumpeted so loud the man seated in the front row lost his toupee. The crowd went wild. They loved it. Ella gave the master an evil look and trumpeted in his direction for a prolonged period of time. The snake slithered in to the arena and wrapped itself around the elephant’s trunk. Ella’s trumpeting ended abruptly making a loud fart sound, the crowd cheered and laughed.

Lizzy the Tigress emerged and roared in her yawn, she had missed her act.

“Cat nap? You’re one with the nerve to show up now aren’t you?” Ella reprimanded her while shaking off the snake. She ate peanuts tossed at her by the amused crowd. She thanked them aloud sounding like rhythmic trumpeting.

The Ostrich emerged from knitting her offspring’s ugly woolen cardigans.

“Would you girls turn it down?” Ella trumpeted loud and prolonged to get back at the Ostrich. In the mean time, playful and full, Lizzy, began to roll on the dirt like a bowling pin, Ella lifted her feet to avoid the tigress. It turned into an act, the humans roared in laughter. Lizzy was trying to cure an itch, Ella was avoiding her, but it looked like the famous feline bowling pin move. The crowd loved it.

The monkeys who had flung poo and smeared their faces with it had shut the ringmaster in the corner closet. The crowd was writhing in their chairs, tummies clasped in full amusement. The show couldn’t get any better. Lizzy burped and jolted to all fours, Ella started chasing her round the ring to get at her.

“Just dreadful! What did you eat today Lizzy, a whole Gazelle? It stinks.”

“No, I was fed with some human supplements of some other carcass; it doesn’t sit well with me.” Lizzy responded very casually after a huge mushroom cloud of flatulence rendered the crowd in chokes and tears.

It was roaring and head nodding, trumpeting, and trunk swinging as Ella chased Lizzy around the ring. An apple smacked Ella in the face.

“Oi! Who was that?” She trumpeted and looked in to the crowd; the room was bursting in laughter.

She began to inch forward in the direction of the projectile. The inch slowly built momentum and soon she was charging toward her target whose smile slowly turned into a countenance of worry. Ella had had it with the Circus and today she was determined to leave it.