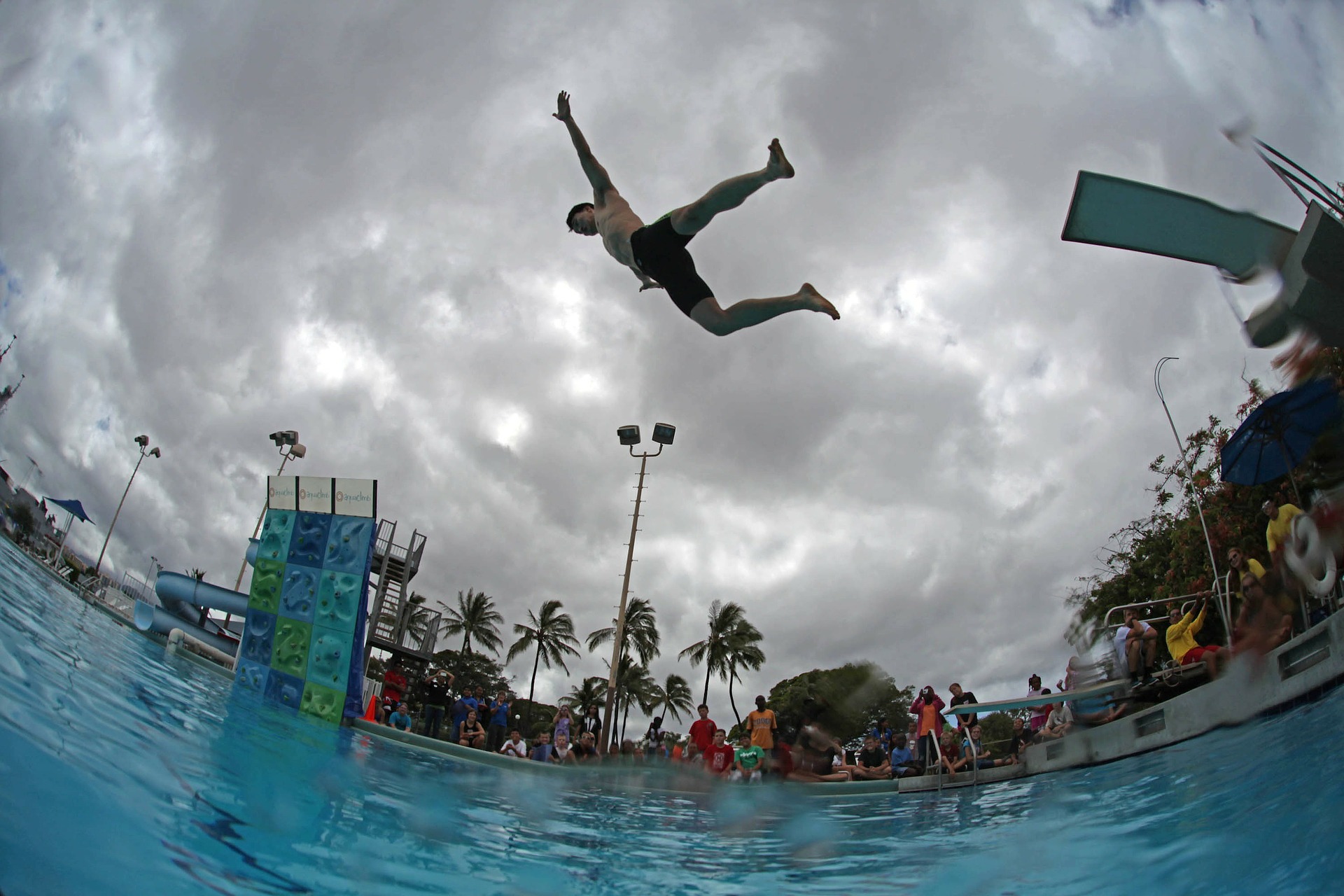 “Now let’s move to the shallow end of the pool!” The Aqua Zumba instructor called out. Andrew bobbed around in the pool waiting for the next set of instructions. His pecs bulged out of his chest exaggeratedly, his rock firm thighs striding gracefully through the water. The man was clueless at what was happening behind him.

Shirley was snorting in laughter at Susan who had attemped to grab Andrew’s forearm and feign a muscle cramp, but failed. Susan had smacked her face in the pool. Her hair was completely soaked, making her look like a wet cat; hair standing at all ends with a countenance smeared with a sneer directed at Shirley, who was unaware that she was beginning to tinkle in the pool. Shirley had laughed so hard, she was clasping her tummy, tears streaming down her face and her tinkle now setting off the pool indicators. Droplets of blue were beginning to emerge around her. The children swimming around her began to scream and flee, a few staying behind long enough to point and draw attention to the peeing adult.

Then suddenly whoooosh! Splat! Susan doused Shirley with a gush of water. Some of the water went straight into Shirley’s mouth. Her laughter had now turned into choking. Shirley thumped at her chest, coughing and attempting to talk at the same time. Susan gave off a sinister smile. Shirley felt a tap on her shoulder, she turned and a pool attendant on the edge of the pool gestured for her to exit the pool. Susan was baffled by his stern look. The man pointed into the pool, there was a blue hue surrounding Shirley. Shirley clasped her face in her hands and hung her head in shame as she waded to the stairs to emerge from the pool. She couldn’t look up. She was humiliated.

Susan’s chuckling was audible in the distance. Her laughter sounded like a car’s ignition being turned on. Susan’s gaze moved back to the other end of the pool where the aqua Zumba session was on going. She waded past the people at the back to get a closer look at the stunning piece of humanity, Andrew now flexing his biceps. Her eyes widened lustfully.

“…and two, three, four, five, and turn, stay with me, feeeeeel the music move you…” Susan was moving alright it wasn’t to the music. She was moving to infatuation which wouldn’t have been bad, if her wobbles and arm juts weren’t injuring the people around her.

The instructor’s level tone turned to concern and was clearly directed to one student, the duck, smacking round the pool in an orange tankini. Susan was like a tsunami in the pool. No amount of slow movement and direction from the instructor seemed to resonate with her. People were chocking and screaming and splashing water in her direction to get her attention to what she was doing.

Susan wasn’t moved, she didn’t care. She was out to get a hold of Alexander and be whisked away into the sandy sunset, running on the sandy shores like Pamela Anderson and David Hasslehoff in Baywatch. As she inched forward, eyes locked on target, Alexander turned and in a high pitched soprano with a lisp yelled, “Hey girl! I see you! Don’t sweat it, just take it slow.” Susan almost fainted at what she heard, his effeminate tone was only worsened by the gesture that followed, he stood with one hand akimbo and did the ‘sister’ snap with his fingers.

Susan sunk in to the pool and waded away.